skip to main | skip to sidebar

Hi, this is Shawn , and a hobbyist breeder of Mandarin Orange Hamsters. Currently, I breed them for colour, temperament and also body size. Our hamsters are bred as closely as possible to the Winter White Standards of the NHC. However, we confess that what we know is quite lacking, however we strive to learn more, and to improve the quality of Dwarf Hamsters in Singapore.

1.Are Pudding Winter Whites Hybrids?
Yes, they are suspected* to be hybrids, alongside most Winter Whites in Singapore. However, this does not pose much problems like birth defects, as they have been so bred to Winter Whites, that they are now considered almost a pure winter white. It is still said that they descended from a Stock of Winter Whites with questionable ancestry. However, this mutation is now quite endangered in the European Union, due to this status, and this beautiful mutation that makes good pets may go extinct if not given extra protection. And contrary to popular belief, it is not a Campbell Argente Hybrid. Argente is recessive, Mandarin Puddings is Heterozygous-Lethal Dominant.

Updated on 21/1/2011
*Reason being suspected, is that the Dutch breeder has hybridise hamsters before. In the UK ,they are almost confirm hybrids, due to the fact that they have red eyes, which is a sure sign of campbell blood.

However, for the first 5 years after the mutation was found, the dutch breeder had an exclusive contract with the Far East, making them common in Japan, Sg. Its is highly possible that these animals are pure, as i have only heard of 1 red eye pudding in Singapore, and that was back in 2004.

However, no western breeders have kept a line of non-red eyes Puddings. All their Mandarin Puddings give out red-eyed hamsters once in a while. Thats the reason why they are called hybrids.


2.Will the Puddings' coat change?
Definitely, as in fact, all winter whites have a different, more fine coat when young, which changes to a rougher coat when older. The colour would also change slightly. This also happens to Puddings and all other winter whites. But they might change to a darker orange, lighter orange or yellow, dark brown or even dark brown to black. These are all genetics, and all puddings should be given equal care and concern even if they are not as beautiful. They are all still docile and very good pets.

3.Will Puddings bite, as they have some Campbell blood?
From experience and other accounts, they will not bite more than a Winter White. For instance, my Puddings have only bitten my 2 twice in 5years. And that bite was mild. Handle untamed Campbells, and you will finally know what is a bite. In short, Pudding winter whites make excellent pets.

4.Will crossbreeding different colours destroy the bloodline?
If you meant crossbreeding colours of different species(eg. Campbell and Winter Whit), it is very very bad, and this should never be done, as Winter Whites and Campbells are built differently, which causes birth problems especially if it's the Winter White that's producing, because of the slightly wider head of the Campbell, which could lead to a loss of both Mum, and the litter.

If it was within the same species, then it is perfectly fine. There will not be problems at all. It is the same as a Left-Handed man with single eyelids, marrying a Right-handed woman with double eyelids, and their children will be a mix of these characteristics. It is even closer related to pair a pearl and a pudding, compared to human inter-racial marriages. Different human races have genetic differences, but a Pearl Winter White and a Pudding Winter White just have different fur colour, but are genetically similar.

5. Where can i find good quality hamsters in Singapore?
This will not be easy, and it requires the finder to do some homework. There are close to zero hamster shows in Singapore, where one can distinguish a good breeder by the number of awards he has won. Thus, the buyer has to ask the breeder questions, and judging by the way the breeder handles the hamster and answers questions, you can tell the difference between a novice breeder and a good breeder. If someone who states they have quality hamsters, it is very important to double check and verify, as this may be a sales gimmick, and one has to be cautious not to be deceived. One general rule of thumb, Someone who loves his/her hamsters will have healthy hamsters.

Q1 Reason: Winter Whites descended from stock without doubtful backgrounds.
Q2 Reason: Pudding is a Homozygous-lethal gene, so there are no hamsters that are Pure Puddings. Anyone who says their puddings are either misinformed, or just tying to smoke their way through buyers who may not have heard this infomation.
The Punett square below explains it. 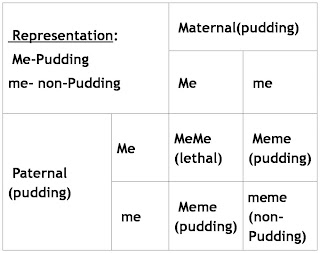 7. Is inbreeding wrong?
This is a highly debatable issue. Many great pet breeds, are inbred to a certain degree, to get their excellent temperament and other characteristics not limited to colour/looks. Golden Retriver dogs were inbred 150years ago, to produce a more vigorous and powerful dog yet one still gentle and trainable. Another close more simillar example is the use of inbreeding to remove cancer in mice, which is usually the disease which kills older female mice. In this two context, inbreeding would be a good thing. However, if this is indiscrimately done, which is more often the case it will result in a large host of problems, and even suffering for the animal. Conclusion is that one should not touch inbreeding. Leave it to the experts.

For more about hamster caring, here is a website that explains it much better than I can ever do. http://www.hamsters.co.uk/hamster_care.htm

Remember, a Winter White or a Campbell can be expected to live for 2 years or more, While Syrians and Robos can hit 3 or even 4years. A pet is for Life!
Posted by Shawn at 11:31 AM

Shawn
Singapore
An avid hamster lover since 2003, keeping mainly puddings and Pearl Puddings. Here are some infomation that i wish to share with other hamster lovers. Any suggestions or comments, do email me @ leeguppy@gmail.com


Pudding Colours, and their combinations


All infomation about Puddings are already up, and much better content regarding care, diet, breeding, rearing and all other relevent infomation can be found elsewhere. For now, this is just a pudding site. Do browse through!

Will update about my hamsters once in a while